As I get ready to slip into the comfortable camouflage of my day job, I can’t help but think back on the cathartic church of Nuit Métal. I can’t say I was ever a true fan of death metal. Maybe I was a bit traumatized my the zeal of my metal-head cousins when I was a kid. Something secretly fascinated me about metal though (call it a morbid curiosity) but I was too timid to explore it. I didn’t realize it at the time, but metal culture is often a type of refuge for outcasts, or self-exiles from the mainstream. Jazz served a similar function for me, but I have yet to see a « circle pit » at a jazz club. (I’m not sure the world is ready for “grindcore bebop”)
Another aspect that took a while to appreciate is the technical facility of metal musicians, especially the drummers. I was mesmerized by Origin’s kit man last night. The more fans I spoke to last night the more I realized that many metal artists are in fact jazz or classically trained. (I was wondering what those guys in music school were doing with their double kick pedals.)
It’s easy to be intimidated by the crowd at a metal show until you get to know their sensitive sides. At first glance though, it’s an aggressive mix of black clad bearded Nordic death metal fans and fully shorn thrashers. The mosh pits are not for acolytes though, we lost our friend Francis that night. He was clad conspicuously in a pink FME T-shirt and shorts. He was last seen heading into the maw between « the walls of death » at the Dying Fetus set. We found his shredded shirt later that morning. The image is burned into my mind like the little girls red raincoat from Schindler’s List.
As I age, I’m finding my musical tastes incorporate a lot more loud music. Perhaps it’s a late discovery of the secret escape it provides from the constant inanities and waves of stupidity that wash over many aspects of city living. Or maybe it’s just that metal makes a more apt soundtrack to the futility of Syrian intervention, the dread of more Fukushima radiation, and of course the tainted Cronuts. 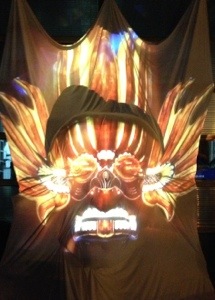