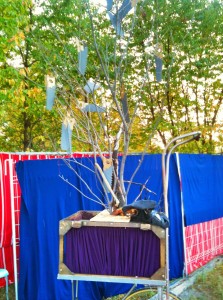 Like waking from a long, pleasant, lucid dream, I am refreshed and renewed. Ready to re-enter the routine of city life in the fall.
There’s a host of happy sentiment washing over me from the festival, but I am left primarily with a deep respect for the volunteers and organizers of the festival. Their vision and hard work transforms a small community each year from proud industrial town, to a cutting edge showcase of emerging artists that is without peer anywhere in Canada. It has ceased being just a music festival and is now a unified artistic gathering of international musicians, chefs, writers, photographers, videographers, painters and installation artists, to name a just a few creative categories.
I have also realized that FME could not exist anywhere else. It has the trifecta of enthusiastic community support, artistic vision, and location working for it. The relative isolation of Rouyn-Noranda from Toronto or Montreal makes it a true escape from typical urban festival fare. Crowds are smaller, shows are much more affordable than in a major city, the venues are all located within walking distance of each other and it is in a generally more hospitable place, nestled within forest and lakes.
For someone such as myself who spends too much time in Toronto; the contrasts between similar events in my city are stark. One especially refreshing aspect of FME is the lack of beer garden quarantine zones, as is typical of Ontarian events. Doing away with this puritanical mentality virtually eliminates the phenomena of binge drinking and the predictable fallout. It encourages family inclusivity and fosters greater community support. Even after the mosh pits of Metal Night, crowds remained amiable.
As I mentioned in my first post, I consider myself very lucky to have been introduced to Rouyn-Noranda and FME. It’s too easy for nerdy, introverted city dwellers such as myself to become too content in a predictable comfort zone. FME is a cathartic, polar bear swim away from my comfort zone: culturally and musically.
Well, that’s it! With any luck I’ll be back next year, reunited with friends and diving right back into the mix…and hopefully with a command of French that’s beyond my current LOL Cat level of speech. 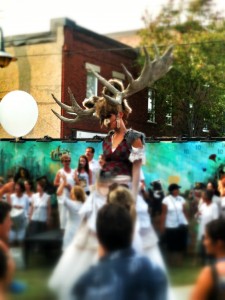