The derrière numbing 7 hour drive back to Toronto from Rouyn (one of the first great monikers I’ve learned for that place is “Loin-Noranda”[…or, “far-Noranda”]) allowed ample time for my colleague Harvey Métal and I to debrief on the highlights of this year’s festival…

…The closing day was bittersweet as always, but a downright beautiful segue of beachfront idyll to politically charged hip-hop to the thundering double-kick mayhem of Le nuit Métal (Metal Night).

The stunning new floating venue at Plage Kiwanis (Kiwanis beach) was the perfect location for the free closing show. The beach was happily packed with an all-walks-of-life crowd, soaking in the perfect sunset, which framed the stage and set the mood for great performances by Bernard Adamus , Dumas and Jean-Piere Ferland.

I had to cut my beach time short however, to make it back to the hip-hop show at Agora Des Arts for an amazing set from Koriass. The originality, impeccable flow and raw crowd pleasing power of the top French-Canadian hip-hop acts is stunning. Groups such as, Radio Radio, Gatineau, Alaclair Ensemble and the closing night’s acts are developing a following far beyond French Canada.

I was unprepared, though, for the sheer intensity of the much anticipated closing set from Loco Locass, which very nearly brought the former church down.

Unless you’ve been spending your summer beneath varied rocks, you’ve probably heard of Quebec’s summer of university student strikes, the pots and pans protests… and of course a provincial election campaign. Tension is palpable. Whatever your political stripe, no-one can fail to be impressed by the level of political awareness and engagement displayed by youth (and not so youth) at a Quebecois hip-hop show. Loco Locass closed with a catchy number called “Libérez-nous des libéraux” (the translation should be fairly easy). By the first chorus, I was deeply concerned about the structural integrity of the floor.

Comparatively, Metal Night at Le Petit Théâtre was actually kind of mild. Hyperbole of course… (plus I don’t want to offend any fans of Obey the Brave who displayed nary a sign of mildness in the mosh pit).

Fun Facts: Did you know that there are regional variations of mosh pits? (Quebecer death metal aficionados prefer “the circle pit”) Did you also know that there is an unwritten, but well understood code of conduct in a mosh pit that maintains a type of anarcho-aggressive equilibrium and keeps people from killing each other? They should give workshops at next year’s FME.

Maybe it was the 4 day non-stop marathon of musical merry making or the double kick drums thundering at a frequency that perfectly resonated in my chest cavity, but I was ready to call it a night before the last act hit the stage.

Our friends had reached a similar breaking point and retreated to Chez Morasse for one last Italian poutine. 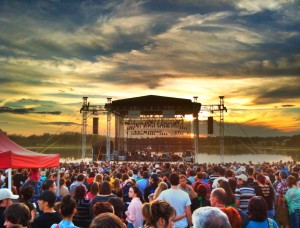