Ok, ok, maybe its not the Game of Death (as per Indian Handicrafts homage to Bruce Lee)but FME is definitely an endurance sport. It requires discipline, a demanding diet, and of course, stamina. Now, some would say this is blatant hyperbole, but if so, then why does my body hurt so much? I’ve gone 3 rounds and I’m bruised and battered but ready for one last push.
Yesterday crescendoed nicely, from surprise punk shows in the afternoon, to the packed Mononc’ Serge set, to Hip-Hop night with Dead Obies and K6A and finally Indian Handicrafts. I had really wanted to make it through Electro Night but I would have crumpled like Apollo Creed to Ivan Drago’s left hook. 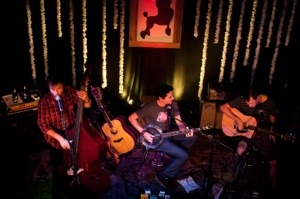 Speaking of putting up the good fight; I think one of the main emotional components to FME that’s become anchored in my heart, is the fierce independence and pride of the artists (and fans). I don’t necessarily mean this in a political sense (though it’s an obvious undercurrent). In this place, at this festival, it’s not Francophone pop, electro, hip-hop, punk, rock and roll or metal. It’s just good fucking music that holds it’s own with anything out there. No Quebecois artist here has anything to prove. And it’s always fun to hear how international and English artists are often taken aback by the fan’s energy and the quality of local bands. This sentiment runs strong among all demographics here. 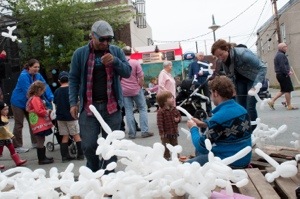 Got a toddler, but have a burning need to see Dayglo Abortions? No problem, thats what FME branded ear protectors are for. Ok, maybe there weren’t toddlers at the cabaret at 0300, but music fans do get their start here very young and there is no room for « helicopter parenting » in these parts. There’s no deep concern for « bad lyrics » here, parents here seem to give their kids credit for having brains of their own and the ability to sort out the context of the music. After all, ask yourself honestly, who’s a better role model: Miley Cyrus or the Dayglo Abortions? The answer should be obvious. 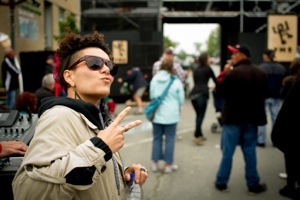